Cats typically visit their litter box around five times a day. While the litter will work to absorb the liquid and clump up solid matter, one element it cannot always minimize is the smell. Given that litter trays are usually in open spaces, a foul-smelling litter tray can be quite unpleasant. Cat litter deodorizers help remedy the problem by either neutralizing the smell or masking it with fragrance, depending on your preference. If you are in the market for a cat litter deodorizer, here are a few of our top picks. 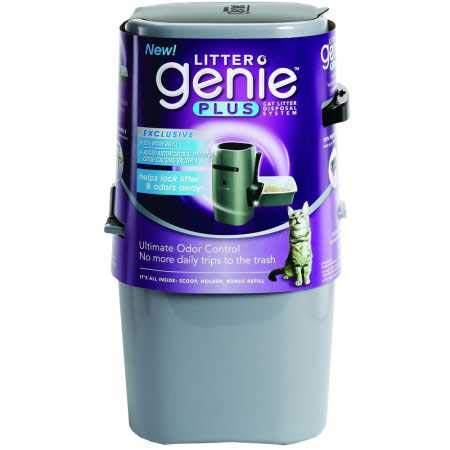 This is a device that physically blocks off the smell of cat litter, as it stores waste matter in a sealed container for up to two weeks.
Best Overall

Pros:
Storing cat litter in a container is convenient for the fast removal of smells. The main advantage is that you are not simply spraying a substance over the litter tray to mask odors, rather removing the source of the problem completely. The design makes it easy to clip the bag and empty again requiring little effort to operate. The refill lasts ten weeks for one cat so it is ideal for owners who have busy lifestyles. Once full, the bags are clipped off, so the smell isn’t released back into your home.

Cons:
In order to work, users need to physically remove clumps from the litter and place it into the device. If you own multiple cats, this could involve a lot of effort. Also, the device is a temporary holding measure rather than a finite solution.

Fresh Step Scented Litter with The Power of Febreze 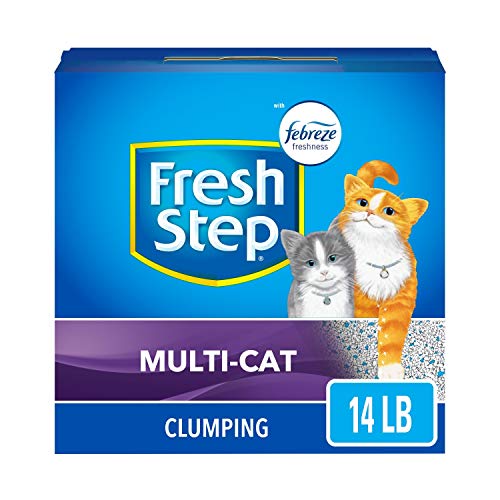 No such thing as too many cats

With its built-in odor neutralizer in the form of Febreze, this cat litter solution is suitable for multi-cat homes.
Best For Multiple Cats

Pros:
The inclusion of Febreze is excellent as the spray version of this popular odor-neutralizing product is usually what people would use to cover smells on its own. As everything is self-contained within the litter mix, owners do not need to add any other products which will save time, money and effort. The formula is also tight-clumping for easy removal of waste matter and is suitable for busy litter trays.

Cons:
The product claims to have a dust-free formula, though a small selection of users found this not to be the case. Similarly, if you dislike the perfumed scent of Febreze, then the formula might not appeal to your senses. Whether this is a negative or not is dependent on personal preference as everyone’s sense of smell is different. 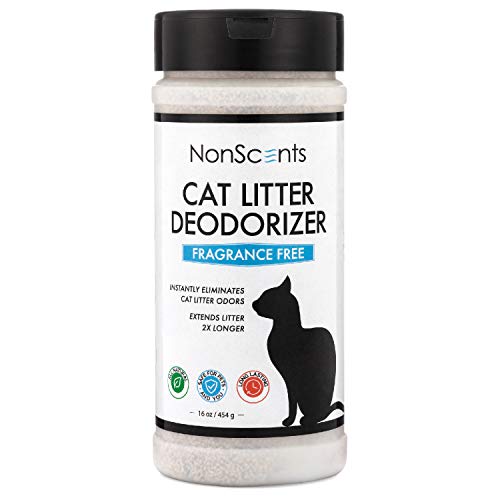 Think inside the box

Pros:
The product does not use a fragrance that may cause sensitivity or irritation in the cat’s skin. The product was developed to effectively eliminate the odors that are commonly found in cat litter boxes. No harmful ingredients are used in the formula. This ensures the user’s cat will not be exposed to any potentially toxic ingredients when this product is used in the cat litter box. The product comes in small bottles. An eight-pound bag is also available, which is perfect for people who own multiple cats.

Cons:
The product does get somewhat expensive when buying a single bottle at a time. Even though the product might aim to provide an enhancement in the cat litter lifespan, it is important to still clean the litter box frequently as the product only acts as a deodorizer. Microbes may still infest the cat litter box.

Easy on the nose

For those who wish to neutralize cat litter odors without the use of scent, Fresh Step has created a marvelous unscented cat litter deodorizer.
Best Unscented

Pros:
Traditionally, cat litter deodorizers work by adding in heavy scents to simply mask the smell. Understandably, this technology doesn’t suit everyone, not least because some cat owners do not want to expose their animals to strong synthetic perfumes. To combat the issue, Fresh Step has created an unscented version of their cat litter that works as an all-in-one system. The formula is also free from dyes and is 99.9% dust-free.

Cons:
The package weighs a whopping thirty-seven pounds. While larger sizes tend to offer excellent value, caution will need to be exercised when lifting or carrying the box, which could be an issue for older cat owners. 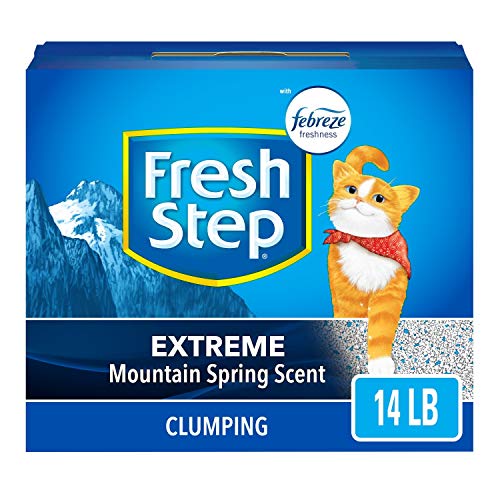 Pros:
The combination of the extreme clumping action and the Mountain Spring scent that’s powered by Febreze works in tandem to eliminate odors. The clumping technology also aids in the easy removal of waste from the litter tray, as well as absorbing liquid better. The formula provides ten days of odor control including protection against the smell of ammonia. Also included in the mix is activated charcoal, which traps and eliminates odors and is also great at fighting bacteria.

Cons:
The extreme clumping is good on the one hand but can also be a hindrance when it comes to removing the clumps, a large portion of the litter goes with it. As a result, you have to top the litter up more often so it could cost you more in the long run.

While cats provide companionship and are treasured members of the family, the fact remains that as living creatures they will excrete waste. Dealing with cat waste material is one of the realities of being a pet owner, and as they usually do so indoors via a litter tray, it can create some strong and unpleasant smells.

The whole purpose of cat litter deodorizers is that they work to remove or at least reduce unpleasant odors produced after your cat has visited their litter tray. The removal can be physical in the form of a storage container to be emptied at a later date. Alternatively, you can also neutralize or mask the smell using a litter mix or spray.

Removing smells is important not least because you want your home to smell clean and fresh. As litter trays are often placed in the kitchen, it can create a putrid aroma if the smells are not neutralized effectively. So, when selecting a cat litter deodorizer, the removal of odors is a top priority.

As previously touched upon, there are different types of cat litter deodorizers. Firstly, you need to think about whether you want a device that stores the cat litter away from the tray or if you want a product that sprinkles directly into your existing litter mix that works when it comes into contact with waste matter. Some brands create their cat litter with an inbuilt deodorizer, which is convenient as it stops the odors at the source rather than reacting afterward with a spray or storage device.

While the main goal of a cat litter deodorizer is to remove unpleasant smells, scent, in general, is a very personal thing. Everyone prefers a different scent type and strength, so keep this in mind when making your choice. For example, do you want the product to have a floral scent similar to that of a plug-in fragrance device? While this may be pleasant to some, you also have to consider whether your animal would like it, especially if it contains many heavy, synthetic chemicals.

Other formulas work to neutralize the smell without adding a detectable scent on top. For those who are sensitive to smell (such as those who suffer from migraines) this type of formula might be more suitable. In addition, removing the waste from the equation via a storage facility is also a method of neutralizing smells without having to add a fragrance in to do so.

Given the global shift across most industries to move away from harmful chemicals and excessive plastic in packaging, it’s perhaps no surprise that when it comes to cat litter deodorizers, owners are favoring natural alternatives–baking soda and charcoal, for example, both of which are natural substances and are also commonly used in hygiene products such as in toothpaste.

The main advantage of using natural formulas for your cat is the overall creation of a more pleasant experience. Your cat has strong scent receptors and if the human finds that the smell of the deodorizer is heavily fragranced, this will be even more so for your cat. Wherever possible, natural ingredients should be chosen to help the environment.

What are the benefits of using a cat litter deodorizer?

If your current cat litter mix isn’t protecting your home against unwanted smells, then the benefits of using a cat litter deodorizer are that it will remedy this. It’s important to address the issue as it’s unpleasant for everyone who is in close proximity to the litter tray–including your cat. If smells continue to build, this can encourage flies. It can be difficult to remove foul odors even with ventilation. By getting on top of the problem, you can ensure your home smells clean and fresh.

Is it better to use an inbuilt cat litter deodorizer or use a separate one?

If you tackle the source of the problem, there isn’t the need for an additional product. However, if you are happy with your current cat litter and it doesn’t have a deodorizer, you may be apprehensive to switch. After all, your cat needs to be comfortable using it and you are the one who cleans it up. The good news is that many brands have expanded their range to feature formulas that have an inbuilt deodorizer. Some cat owners may prefer to have a separate product in case the original runs out or fails to work adequately.

What other steps can I take to reduce the smell of my cat litter tray?

It’s recommended that you change your cat litter mix every ten to fourteen days. If the smell is a concern, then it makes sense to increase the frequency at which you replace the litter mix. If you have multiple cats, it’s even more important to keep on top of this, especially if they don’t have separate trays, which ideally, they should have to avoid territorial issues.

Other than switching your cat litter to include a deodorizer in the formula, there are some other steps you can take. If your litter tray is currently placed in a prominent area of the home, then moving it elsewhere (ideally where there is a lot of ventilation) can aid in reducing odors.

While dealing with litter trays is a downside to being a cat owner, it can’t be ignored. Regular cleaning and disinfecting of your home is the best way to prevent odors of all origins.

This page is owned and operated by SearchIQ. © 2020 All Rights Reserved

Are You a Merchant?

Feature your product on top publishers sites with SearchIQ Commerce.